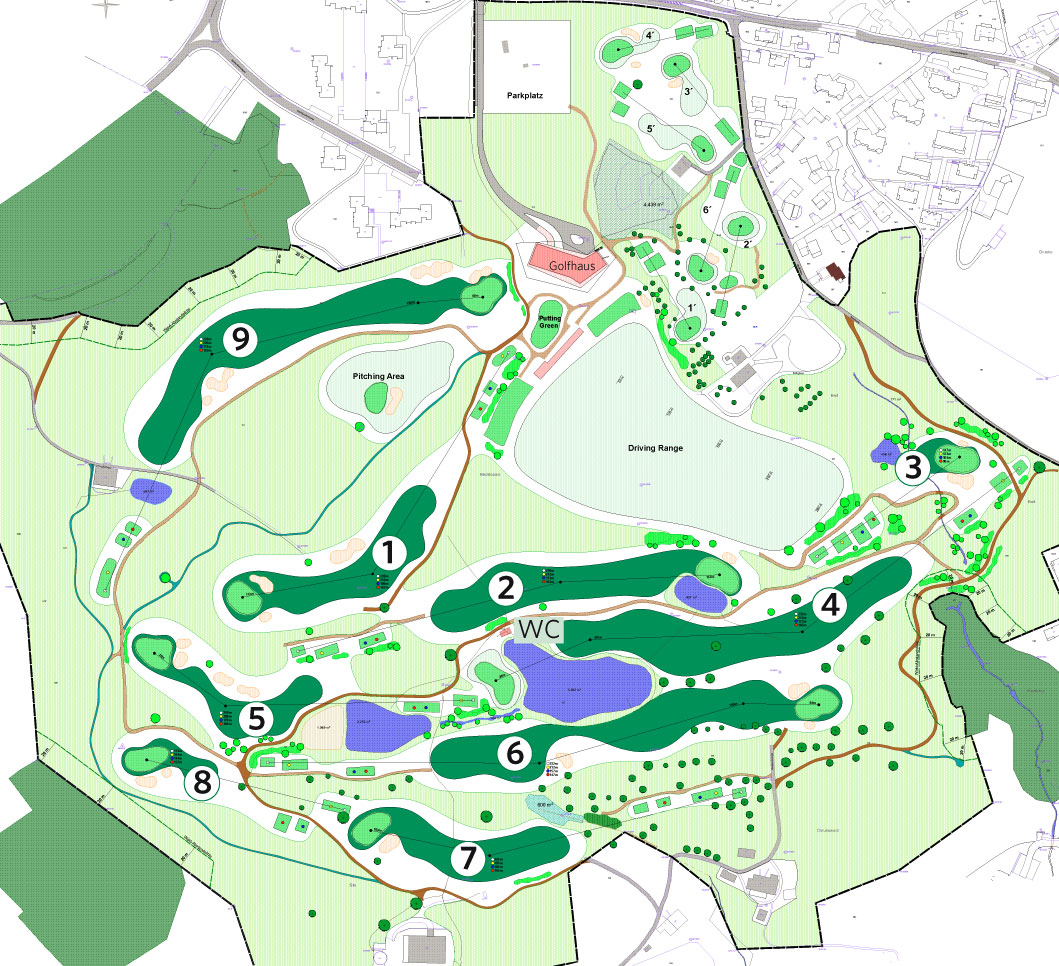 A short PAR 4. From the elevated tee it should be no problem to place the drive on the open fairway. A large bunker is waiting on the right in the landing zone. But it should hardly come into play, just like the single tree on the left side. The second shot, a short iron, must then be played slightly uphill to a green defended by two bunkers. At the top, the view over the bay and the city of Lucerne opens up for the first time, so overwhelming that it is difficult to concentrate on the putt.

On the left, embedded in the slope, are the tees of hole 2. The whole course up to the green with the pond is freely visible. If you keep your drive a little left, you have a good chance of the ball rolling back into the fairway. The second shot into the green is demanding, because depending on the position of the flag, the water has to be played over to a greater or lesser extent. A medium iron is sufficient for the good player. The recreational golfer will rather need a resque or a small wood or even plan a stop in front of the pond. The bunker at the back left of the green only comes into play when the flag is at the very back.

Again from slightly elevated tees, the mid-length PAR 3 presents itself as well manageable. A small stream crosses the fairway at a clear distance in front of the green. The green is directly defended by a larger bunker in the front right and a small one in the back left. The modelled putting surface is also challenging. The tee shot should be played as close to the flag as possible.

The first PAR 5 starts very friendly. The stream crossing in front of the ladies' tee should not be a problem. The fairway lying in a hollow gives a good feeling. However, the tree on the right should be avoided. Only the long hitter will land far enough in front to notice the large pond in front of the green. Attacking the green with the second shot would be foolhardy. The normal player will target the landing area in front of the pond or to the right of it. Depending on this, a short iron or a pitch into the green remains. Only those who lay up in front of the pond still have a middle iron in their hand, which they should hit well to avoid penalty shots. On the large, transverse green, the tension is not yet gone. Three plateaus ensure that the length of the putt must be precisely measured.

The tee shots on this short PAR 4 lie next to a pond that must be played over. The largely open landing area is narrowed on the right by two bunkers so that the slight dogleg to the right is also played out and a shortcut is not too easy. Another two bunkers in front of the green prevent a roll into the target. They require a high and precise approach. In order to be able to enjoy the overwhelming view of Lucerne, enough time should be taken for putting.

Probably the hole that is discussed the most. The view from the elevated tees reaches all the way to the green on this long PAR 5. The tee shot should be played exactly in the direction of the bunker. It lies in the middle of the fairway, but is hardly reachable. The left side of the fairway is the ideal landing point for the second shot, but it is bordered by a stream that turns into a large pond. The second landing area is then open, with only rows of fruit trees to the left and right. To the ondulated, undulating green it goes slightly uphill, a larger bunker on the left and a small one on the right catch slightly warped balls. Every player will be happy to note down a PAR on this hole.

The following holes all run on the high plateau in the peripheral area. Always on the left, the unobstructed view of the lake, the mountains and the city is inspiring. The tees on this short PAR 4 are surrounded by old fruit trees. A biotope lies in front of the player. A footbridge leads to the fairway. The direction of play is determined by a large tree in the landing zone on the right. The second shot then goes uphill to a higher green, which is defended by a deep bunker in front on the left.

A long PAR 3, where it is noticeable that the ladies' tees on the left and the men's tees on the right are separated by a fruit tree in the middle of the fairway. For the ladies, this results in a different angle into the green, more from the left. What makes it more difficult is that the two bunkers block the free way into the green from there. For the men, the entrance opens up accordingly. This requires a much longer shot. The green is slightly elevated and, like all greens, is excitingly modelled. The flag positions are clearly defined.

The final hole is a short PAR 5. Here, even the good amateur has a real chance of reaching the green with the second shot, especially since the dogleg to the right allows a certain amount of shortcutting. One should not overdo it, because two bunkers are waiting on the right in the landing zone, which can hardly be played over. But back to the tees: These are elevated at about the same level as the landing area. To reach them, a deep ravine with a pond must be played over. If the tee shot is not long enough, the green is not visible. Only with a good drive is it advisable to attack towards the green. A fairway bunker should be avoided on the left and a second bunker directly on the green. Behind the green you can see the golf house, which more or less indicates the direction of play. An exciting final hole, in extreme cases a birdie or even an eagle can still turn the tournament result around.

Thanks to the new golf course, the sustainable spatial "green border" between the municipality of Meggen and the city of Lucerne will remain in place.